Close
US & CANADA FREE SHIPPING
Home / Mounting on Metal Studs / Can I use lag screws/bolts for metal stud?

Can I use lag screws/bolts for metal stud?

Can I use lag screws/bolts for metal stud?

Lag bolts are the common bolts supplied with any wall mounted gizmo you buy today. This is because the manufacturer assumes that you have a wood stud wall or a concrete wall. Metal stud wall anchors are NEVER provided with TV mounts in 99% of the time. This is an exception to some of Condomount products.

Lag bolts CANNOT hold weight when fastened through a metal stud. Unlike wood, metal studs do not catch the lag bolts teeth. Metal studs are hollow.

The gauge of the metal studs used for internal walls is usually 25AWG. Is some rare occasions up to 22AWG.  The gauge for external wall metal studs is thicker around 16-18 gauge. Standard steel studs available at home centers use 25-gauge steel. At whatever gauge, lag bolts are NOT something you use on metal stud walls.

What are the best screws for metal stud walls?

a. Best Screws to assemble metal studs together to build the frame.

The common screw for this is 1/2" #7 Pan-Head for the common 25AWG metal studs and #8 self tapping for the tougher thicker metal studs. Drive the screws at medium speed. Choose a clutch setting strong enough to drive the screw home but not to strong that it strips the screw hole and weakens the joint.

The technique for framing steel walls is to first fasten the floor and ceiling tracks and then install the studs one at a time. On the floor, lay out and mark the location of the wall, fasten the steel track, and then locate the position of the ceiling track using a plumb bob or a level held against a steel stud. On a finished ceiling where the stud wall framing track runs perpendicular to the joists, fasten the track to the underlying joists with 1-1/2 in. self-tapping drywall screws. If the track runs parallel to the joists, fasten the track to the ceiling with drywall anchors.

b.  The best screws to attach drywall to metal studs 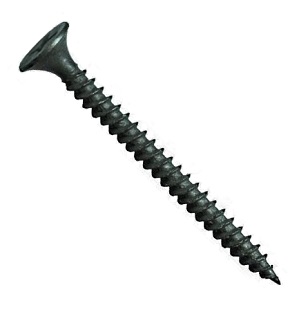 The best screw for mounting heavy items onto metal studs is not just a screw but a combination of a metal flange and a machine screw.

Never use lag bolts on metal studs, that can cost you. Many condo dwellers that use the lag bolt from the TV mounting package have experienced TV falling over them. TV mounting packages only have bolts for wood studs and concrete/brick walls. In order to get your TV mounted on a Metal stud wall can get Condomounts 200lbs Steel Stud Mounting Kit.

The 200lbs metal stud mounting kit or also known as steel stud mounting by Condomounts has  bundle of the screws, anchors, washers and included is the sharp pilot head metal drill bit to easily cut the metal stud through.

A video of how a heavy duty anchor is inserted into metal stud is as below. Fast Metal stud anchors. The best part it also works on drywall. MSK9001.